There is Room at God’s Table 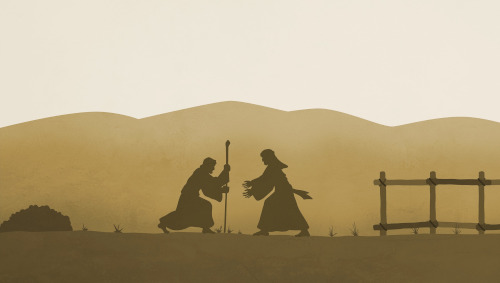 Of course, all of these readings of the scripture text are true. That’s one of the wonderful things about scripture, namely that there is always more to be discovered with the aid of the Holy Spirit, the gathering of community to let these texts wrestle with us, and an open heart and mind. There is always more. Today, though, I’d like to draw our attention to how Jesus is using this parable, the story that he tells in order to reset the focus of the community and to remind us of the restoration power of God through community. Let’s dive in by considering why Jesus tells this parable in the first place.

You see, just prior to Jesus sharing this parable, we hear that there were Pharisees and scribes who were complaining to Jesus about Jesus welcoming tax collectors and sinners to listen to him and even eat with him. Pharisees and scribes – now these were both well-known religious and legal experts in Jesus’ day. Plus, the Pharisees were Jewish leaders who believed in the concept of resurrection. So, when we hear “Pharisees and scribes,” we are talking about folks who had societal and religious power and prestige, education, and training. These were well-placed in society folks who are complaining about Jesus inviting in sinners and tax collectors (and we remember that tax collectors were fellow Jews reviled by other Jews because it was well-known that they lined their own pockets with extra money taken while they collected taxes for the Romans - aka the enemy).

The Pharisees and scribes are complaining, in other words, about how Jesus is choosing to fraternize with folks they deem unworthy. Folks who have lost their way. And Jesus responds to them with a story. A story of a son who could not be more unworthy. Thumbing his nose at tradition and family, he demands his inheritance while his father still lives, then squanders it all! And then, once he realizes the pigs of a farm where he has taken work are eating better than him, the son comes home and begs for mercy.

In other words, Jesus is saying to the Pharisees and scribes (and us), if you think tax collectors and sinners are unworthy, check THIS guy out. And by the way, says Jesus by way of the story, did you notice how the father dealt with the unworthy son who repented? He was welcomed home. Not with ridicule or shame or punishment, but with a feast with the very best that could be offered. And by the way, says Jesus, did you notice how the older brother behaved? Petulant, exclusive, kind of whining. Look in the mirror says Jesus to the Pharisees and scribes (and to us).

Hmm…well, if we were standing in judgment of the younger son who behaves terribly, now we are likely standing in judgement of the older son who lacks compassion. Yet who among us has not strayed in countless different ways on countless different days? As the younger child in the story, demanding what is not ours and squandering what we have been given? Like the older son, judging those around us and even, perhaps, sometimes judging others around us as unworthy of human or divine compassion, with behavior such as we see in the Pharisees and scribes of Jesus’ time. I know I sadly have done all of the above.

Yet we should not miss that both of the brothers are met with compassion from the parent figure in this parable. Even the older brother is loved and affirmed, even as his attention is re-directed where it should have been all along, to a radical and welcoming love that has room for those who have strayed but come home again. Both the younger brother and the older brother, along very different journeys, arrive to the same destination of compassionate welcome and mercy.

And Jesus chose to have this story of restoration take place within a family, one type of community, even as Jesus was telling this story in the midst of another kind of community gathered around him, in need of restoration in their souls and lives. In the words of the now late archbishop Desmond Tutu’s, from one of his books entitled, The Book of Forgiving, we hear that (and I quote):

A person is a person through other persons. None of us comes into the world fully formed. We would not know how to think, or walk, or speak, or behave as human beings unless we learned it from other human beings. We need other human beings in order to be human. I am because other people are.

By your presence here, by our collective presence every time we gather as community, space is created through which the holy work of restoration through Christ can take place for us, individually and collectively. Christ can speak to us in ways when we gather as a whole that we cannot discern or understand when we are apart. Together we are more than the sum of our parts. And when we are gathered by Christ, though our faults and judging of others may be revealed, more powerfully still is revealed to us the compassion and love of Christ, who is not only the parent figure welcoming both lost children home, but also the presence that was alongside them while they were lost.

Today, if we will allow God in Christ to make it so, we can discover that we have been found again, together in community. Reset by God in Christ in our focus – away from judgment and judging and restored and rooted in the places of compassion and forgiveness. Reminded that because other people are, we are, too. Somehow it is in the journeying, whether we wander far afield or get lost by never leaving home, that God in Christ gets in the mix of our lives and for the good, and forever. And by grace we can come to see that by grace and the cross a new creation is flowing forth to us, and through us for this world. Thanks be to God. Amen.