The Biggest Production, Ever 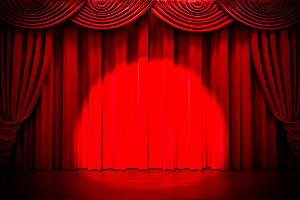 Some day I want to be part of staging the biggest Christmas Pageant ever!

There will be beautiful organ music playing and a gigantic children and adult’s choir singing classical Christmas carols, but there will also be an African steel drum band and interpretive dance ensemble. The woman who designed the larger than life animal puppets (carried by two people each) for the Lion King on Broadway will create animals for the manger scene. We’ll build an actual stable, complete with hayloft and cooing doves. We’ll set up the stable far ahead of time and outside somewhere so that real animals can live inside for a while so that the whole area, even after it is cleansed from all that animals can leave behind that we’d rather none of the actors step in, have a more authentic smell and feel to it. There will be real flying angels – children strapped in harnesses singing “Glory to God in the Highest and Peace to God’s people on earth.” This staging of the Christmas Nativity will be multicultural and multinational. I’m thinking Disney meets the United Nations meets the Rockettes at Radio City Music Hall meets the acrobatic circus Cirque De Soleil.

It’ll be grand and gripping and people will leave feeling deeply moved and excited. And everyone will say what a great job we’ve done and how special we made Christmas. And we’ll pat each other on the backs and walk away satisfied that we’ve given a great show and left everyone wanting more, more, more!

The point of Christmas, I mean.

Christmas isn’t a stage play or movie to be produced. Christmas isn’t an event to “get right” and then get over with, pack up and put into hermetically sealed boxes until this time next year when we get the A Team back together for rehearsals and the next production of the show.

Christmas - “Christ mass” - this worship service that is sometimes referred to as a mass, in which we celebrate the arrival of the Christ as a newborn child - Christmas is less about the Rockettes and more about the God who made living water come out of the rocks for the Israelites as they wandered in the wilderness of the desert. Christmas is less about presents and tinsel and lights and more about the God who chose, not to be born to wealthy parents in the best part of town, but to be born as the son of a carpenter and an unwed teenage girl out in a smelly stable where no one may have cleaned up after the animals. It was likely a cold night, made colder by the oppressive Roman occupation that held Israel captive to a tyrant over two thousand years ago.

Christmas is about celebrating the God who is powerful enough to choose a completely helpless human child as the vessel into which God would be born; a frail child who would reflect the frailty of all of us who live and die in this troubled and troubling world. God who is Author of the Universe and who could have chosen any way at all to enter this world; God chose not to be a fire-breathing dragon or movie star or billionaire world leader, but a helpless human child; an utterly dependent human upon whom the entire fate of the Universe depends.

Christmas is about God in Christ helping us to make room for this God who humbled himself to take on our form and our lot so that these frail human forms and the state of this world would not be the final story. So that where hatred and distrust roam forgiveness and mercy and love and joy could be planted. So that a world full of the pain of teenage mothers and fathers struggling to make ends meet for their children could also be a world where hearts are softened and neighbors build trust and the possibility of a decent life for all people by getting to know one neighbor at a time.

My friends this story, this real story of Christmas, this IS a big production. This is the biggest production the world has ever known, the grandest entrance ever made by God into human history. It is the story of love that conquers smallness and greed, joy that is bigger than any material gain we could ever attain, and forgiveness for the unforgiveable.

So God, please forgive us if and when we make Christmas into a flashy production, more like a hollow chocolate that the sumptuous feast and song that signals to the world that Christ has arrived.

Hope has come down to fill our hearts and this world; not just today or tonight, but for every day. The angels are singing glory to God in the highest and peace to God’s people on earth. Not just to us in the Hudson Valley, but for all people throughout the world. In the grand cathedrals and humble country churches and out on the streets, we celebrate this Hope, we celebrate the Promise incarnate in the Christ child – the fully-human-fully-God, the Resurrection-fulfilled-Resurrection-story-begun-again - Hope for the world. Hope for the entire world. Amen.