Surprise! Jesus Isn’t What You Thought 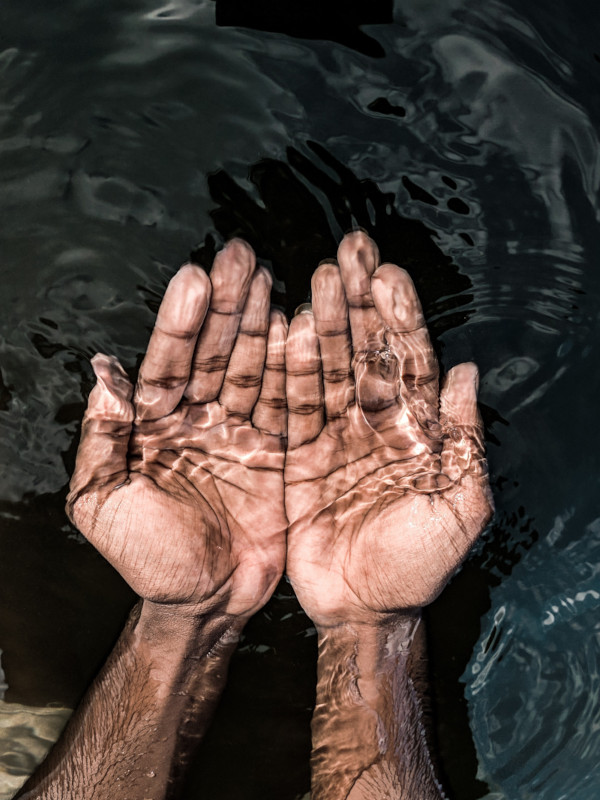 I graduated from Seminary in 1985. As a gift my husband arranged a group tour to the Holy Land. There I purchased this olive wood carving of the Samaritan woman at the well. I had to have it because in my studies I learned a new interpretation of this well known story. I learned it from Dr. Raymond Brown, a world renown Jesuit priest and scholar on the gospel of John. He also alone argued on the papal commission for the ordination of women in the catholic church.

One of the things he taught was the fact that this is the longest recorded conversation that Jesus has with any person in his ministry. So the story is worth exploring.

"It’s not to Peter as we’ve always been taught or to any other disciple that Jesus reveals HE is the Messiah."

Jesus is returning to Galilee. Did he have to go through Samaria? If he wanted to save time, yes. So he purposely ignored Jewish law that branded Samaritans as unclean, unfaithful Jews who intermarried with their conquerers. That’s the first rebellious act of Jesus in this story.

Then the 2nd rebellion. Jesus is human. He’s tired, sweaty, thirsty, so he sits at the town well…the revered well that had belonged to the patriarch Jacob. It’s noon, the sun is at its height, and along comes a woman to draw water…alone…at the hottest time of day. Why isn’t she coming early in the morning, when it’s cool, with the other women?

Jesus sees her and asks for a drink. Now this is one spunky, aggressive, smart woman. She wasn’t obeying the rule of women being silent. She responds with what could be labeled an intelligent question of faith OR could be labeled as sarcasm.

I know you are a Jew she says. Yet you are asking ME, a woman you call unclean, a woman you aren’t supposed to converse with…for a drink? (Maybe she was also thinking that he couldn’t possibly drink from her unclean cup even if she did give him water.)

Jesus ignores her question and answers with great provocation. If you knew who was asking for a drink you would have asked HIM and he would have given you LIVING water.

Living water? What’s that? Do WE know? From here on this conversation is on 2 levels. She speaks on a normal physical level. Jesus speaks on a spiritual level. And sometimes it’s rather funny.

She ignores his statement about living water. Sir, she says. She sounds respectful. But she, too, is again breaking a jewish law by speaking with a man who is not her husband. SIR, you have nothing to draw water with. This is a very deep well. Where do you get that living water? Are you greater than our father Jacob who gave us this well? She’s reminding Jesus of their common heritage.

Well Jesus won’t give up. Everyone who drinks this well water will thirst again but if you drink MY water you’ll NEVER get thirsty again because my water will well up into eternal life. In other words, my water is not stagnant but will bubble up into new life. (Do we feel this water in us… ever?)

She responds, still on a physical level. Sir give me this water so that I won’t get thirsty and never have the heavy job of drawing again! (Is she stupid or being sarcastic? Is she so stuck in reality that she can’t see the vision Jesus is laying before her?)

Whatever, Jesus tries shock therapy. Go call your husband and have him come here. She says I have no husband. Jesus knows she is being honest. She has no husband & he says you are right cause the guy you are living with is not your husband and you have had 5 other husbands. WOW! This woman has been around the block a few times. And now, to me, comes the funniest line perhaps in scripture. Sir, I perceive you are a prophet! She didn’t accuse him of lying or impugning her reputation. She just sees him as a prophet. (Now I stop this story to ask what have YOU been taught about this woman? Did you always believe she was immoral trash? I've always thought she gets a bad rep. Remember marriage in those days wasn’t singing “Going to the chapel and we’re gonna get married” Marriage was just having a sexual relationship. But could she also have been the piece of property, a widow, that is passed from relative to relative under levarite law?

Well, she can’t get into all this so she switches to theology again and talks about the different ways Samaritans and Jews worship.

Jesus sees this conversation is going nowhere so it's HIS turn to abruptly change the subject. He says that YEH there are differences between us so let me just tell you this. Truly, the hour is coming when none of that will matter because true worship is God as the spirit of truth.

And now we come to the HUGE shocking climax. She shows her smarts again and says I know the Messiah, the Savior, the Christ is coming and HE is the one who will reveal everything to us. And so to this foreign, unclean, sassy, assertive woman Jesus says I AM HE.

It’s not to Peter as we’ve always been taught or to any other disciple that Jesus reveals HE is the Messiah. It’s to this woman. Why did we never learn this? What does it mean? I believe St. Paul got the meaning when he wrote those liberating words in Galatians. God will be God and whether one is male or female, rich or poor, educated or unschooled, gay or straight, republican or democrat, caucasian or african…we are seen by Christ, claimed by his love and forgiven to serve. AND, did you also know that this Samaritan woman was acclaimed by Paul and the early church as the founder of the first christian churches in Samaria? Guess that living water is powerful stuff.