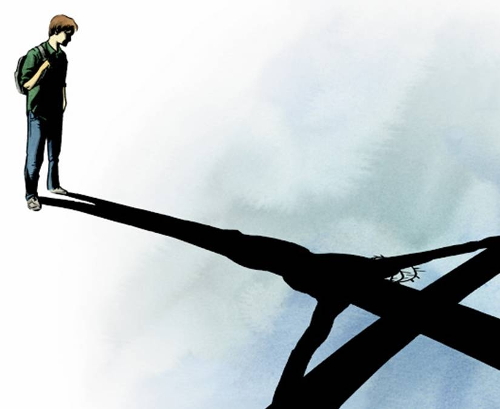 In the little daily prayer books that we make available out in the Narthex here at Redeemer, New Paltz, today’s Psalm – Psalm 85 - is listed together with mention of Clare of Assisi, who lived from 1193 until 1254. “Let me hear what the Lord will speak…that His glory may live in the land.”

Clare of Assisi was one heck of a faithful, persistent woman. Sometimes referred to as alter Francis, or “the other Francis,” because she followed so closely in the footsteps of Francis of Assisi, seeking to emulate his virtues and way of life, Clare nevertheless distinguished herself in her own right as a person and leader of faith. Her devotion to founding the order of nuns that would become known, after her death, as the Order of St Clare, was single-mindedly carried out from the time that she heard God’s call to leave her life of wealth and her prestigious family in order to carve out a different way forward in the world. She built an order of nuns and a mission of faith that would stay true to it’s course even when that meant constant petitioning and at times defiance of the Church powers that sought to influence their order in other directions.

“Let me hear what the Lord will speak…that His glory may live in the land.”

Clare certainly embodied the kind of deep listening and faithfulness of which the Psalmist in today’s lesson speaks. She was no doubt an amazing woman, and it is wonderful to reflect on her faithfulness, but I could almost wish we also had some records and knowledge of her imperfections as well. This is one of the strange things about history, that in the passing on of its stories the ragged edges of people are either made more ragged, or entirely worn away as though they did not exist. Since she was only mortal, we can be sure that Clare did have ragged edges and failures and struggles just like the rest of us. As surely as Peter stepping out in faith upon the water and then sinking because of his doubt in today’s gospel lesson, Clare would certainly have needed the helping hand of the Christ to pull her back from the brink of drowning.

Don’t we all need that almighty, omnipotent Hand? Whether we feel like we regularly practice stepping out in faith, or whether today is the first time we have ever considered leaving the relative safety of our boats in order to walk to Jesus, we all need the helping hand of the Christ to guide us safely on the journey. And, though Christ chides Peter after pulling him into the boat, saying “you of little faith, why did you doubt?” these words are spoken more like a loving parent or beloved friend than as a chiding religious leader. As in his appearance to Thomas after the resurrection, Jesus does not seem so much to be condemning Peter as to be naming the truth that we all, all of us, will experience from time to time: the sting of doubt, the questioning heart.

For faith is not a finished product, but a seed planted time and again within our very souls, inspiring the best of our compassionate, justice-seeking actions and working over the potholes of doubt that inevitably get created by the traversing of life’s roads. Faith did not begin with Clare stepping out to build a movement or with Peter stepping out of the boat. Rather, faith began with Jesus’ outstretched hand saying, “come, follow me and I will work wonders through you.” This same hand outstretched hand of the Christ continued to sustain Peter and Clare and this same hand is constantly being extended to us – to you and to me.

Whether we see it or not, this invitation to faith and work to cultivate and renew faith is regularly being planted in our souls by the almighty, omnipotent Savior who is the Christ. Being planted by the Savior whose very blood was shed so that we could be pulled up from the brink of drowning, time and time again. And find that instead of drowning we have been washed clean of the stains of sin and our human brokenness; that we have been freed for faith. That we have been called not just for today, but that we have been called for all time. We are being asked to follow not because we have no doubts, but because God is at work even though we will at times doubt. God is at work despite our fear. God in Christ wants us, like Peter and Clare, to listen and to follow. And we seek to listen and follow as individuals and as a congregation.

This past week, in our Art, Hands, and Heart summer program, we focused with the seven to eleven year olds gathered on stories and art projects, music and games that helped us digest and practice daily themes as they came to us in stories presented each morning. In other words we spent the week in total immersion of faith practice, and deep listening.

On the first day we considered the beauty God has placed within each of us, and how to practice trust instead of worry. And we created Art mirrors and played games and made joyful music with drums and voices. On the second day we considered how much stronger we are in community than alone, and watched a single, breakable stick become an unbreakable bundle when placed with many other sticks alongside it. On the third day we pondered loving self-sacrifice and how to place the good of others before our own personal desires; making the personal care products to be given away at the Caring Hands Soup Kitchen that we mentioned last week. Day four had us writing down what we wanted to forgive in others and what, in ourselves, we wanted others to forgive, dropping these papers in a camp fire. Then day five had us thinking about how to harvest the best of what we learn in life and to nurture it for future seasons and for sharing with others in order to build a better world. Yes! We spent the week immersed in building faith practices and in deep listening.

Clare certainly had to build resolute practices of faith – prayer and worship - that would support communities for years, even millennia to come. Peter needed to learn humility as part his faith practices that would lead him on the road to becoming the rock upon which God would build the future Church. And we need to be finding ways – all of us - to practice our faith as well and to learn to listen ever more deeply for God’s persistent call to faith.

Worship – as regularly as possible - is certainly the heartbeat of faith practice, to be sure. So, too, are finding ways to volunteer through this congregation in the wider community; not just because it’s nice or because we’d feel guilty if we didn’t. No! Volunteering because it’s a place where we can practice this faith in action. Where we can explore the art of faith coming to life through us and around us as we share Christ’s welcome.

So perhaps we should, with God’s help, decide to step out of the boat and pick one project with which we might help through Redeemer to share Christ’s welcome. Pick one aspect of our faith life we’d like to deepen, such as prayer, and add 5 minutes a day, or listen to one podcast from a prayer instructional series a week, or pick one charity with which to increase our giving by 10%. Though admirable to set ourselves lofty goals as people of faith, and though useful for kids and adults to have total immersion experiences like weekend or week-long retreats, it is perhaps equally important to realize that we, the Clares and the Peters, are being built in faith by God and Christ through the cross one day, one act, one deep listening practice at a time.

Surely God is calling, and surely with God’s help through Christ on the cross, we can share the light of this almighty, omnipotent Savior so that “His glory may live in the land.” Amen.