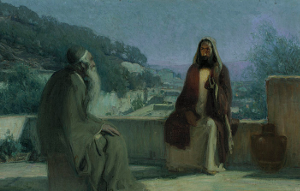 The ELCA’s website for missionary work notes that, “As you read this, some 225 ELCA pastors, doctors, nurses, teachers, theological educators, communicators and community organizers are serving on every continent but Antarctica.” (ELCA.org) I wonder how many of those people, when they were 5, or 10 or 20 years old, thought or planned to be missionaries?

At some point these missionaries, like Abram and Sara in our first lesson, heard God’s call to go and carry God’s blessing into the world. And they went. And they seek with God’s help to serve as a sign of Christ’s living water, poured out for new birth.

When God in Christ reaches into our lives, we can expect great love and freely given mercy. And this calls us, like our ELCA missionaries, to be signs of God’s love and mercy through Christ for the world.

At a gathering of our area Lutheran pastors this week, one pastor told the story of her internship congregation in Boston back in the late 1980s. The congregation had dwindled to an average of 15 people in worship on a Sunday and it was located in a really bad neighborhood. At that time a significant number of immigrants from Asia were settling in that part of the city, and an element of the mob that was active there, and did not like these folks encroaching on their territory, firebombed a tenement building, leaving over 20 immigrants homeless.

A homeless woman passing by these newly homeless folks, literally sitting on the curb, not knowing where to go next, brought them to the local Lutheran church on the square and knocked boldly on the door. When the pastor, much less boldly, opened the door, this woman, who did not belong to the congregation, gestured to the people behind her, and said “You are the Church, aren’t you? Then do something.”

At some point, amidst the calls to neighboring congregations and relief agencies, the people of this congregation realized that they had discovered their calling. They discovered that, even as Paul reminds us in our second lesson, the promises of God fulfilled by Abram who became Abraham and Sarai who became Sarah, have been radically expanded through God’s saving work in Christ. As J.R. Daniel Kirk writes,

The salvation that God has brought in Christ is not an act that segregates one people on a special piece of real estate. It is a world-wide, even cosmic renewal that embraces the entirety of the created order. (Working Preacher, 2017)

When God reaches into the life of our congregations, we can expect great love and freely given mercy. And this calls us as communities of faith, like the congregation in Boston, to be living signs of God’s love and mercy through Christ for the world, reaching across perceived boundaries and providing for real need.

The cross is God’s saving grace through Christ intersecting with the world in need of saving. The cross is God’s saving love through Christ that speaks boldly through lives that think less of themselves and their need and more of others and what is needed. The cross is that instrument designed by God to cast off our blindness so that with new birth and new vision in Christ we might be sent as a sign of Christ’s hope for the world.

Yesterday Redeemer, New Paltz hosted a workshop called “Healthy Congregations.” There were 34 people from 8 congregations and three conferences present. Our Metropolitan New York Synod sent Kathleen Koran to lead discussions on how to build healthy communities so that we can better serve God in Christ for the world.

One of the marks of healthy congregations is that they are focused on mission. They are focused on where God is calling them to serve in the world. Let’s face it. It’s much harder to bicker about the small stuff when we are captured by an ever-deepening sense of God’s mission for us as a congregation.

As I sat in the workshop I couldn’t help but think about how thankful I am that we as a congregation have clearly articulated our mission to “Share Christ’s Welcome.” And how grateful I am that this mission statement is not a stale document sitting on the shelf, but a living effort by God in Christ – through us – to share the hope and promises of God with the world.

Nicodemus comes to Jesus in the night, probably fearing lest it be discovered that he, a Pharisee, was seeking the wisdom of a Galilean peasant who was rumored to be the Messiah. One thing is for sure, what Nicodemus found there with Jesus in the darkness would forever bring him into the light. We know this because Nicodemus would fully honor Jesus after his death, as a disciple would a beloved teacher. And Jesus, there in the darkness, proclaimed to Nicodemus and to us the amazing and irrepressible hope and truth of God’s new birth from above.

In this second week of Lent we are invited through scripture to remember God’s persistent faithfulness throughout history and God’s saving work through Christ on the cross, a saving grace that radically expands the scope of those who shall inherit God’s promises. By God’s saving grace through Christ on the cross we have been given a new birth. There is no greater gift than this gift of new life. So how will we honor our beloved teacher this day? How will we, as individuals and as a congregation, serve this Jesus who is not only our teacher but our Savior who has claimed us in love from the cross?