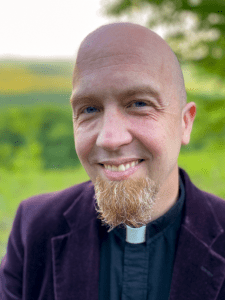 Oh, that Jesus is a crafty One. That Jesus is a bold One. That Jesus - our Jesus - will not be trapped and confined by the ways of the world and corrupt ruling powers, but instead cuts through the murk and the muck of this world in order to point us towards a life of faith that is, as the apostle Paul wrote in First Corinthians, “a still more excellent way.”

So, it should be no surprise that when Jesus is confronted in today’s gospel by the Pharisees and Herodians, who first flatter him and then seek to entrap him with their question about whether it is lawful to pay taxes to the emperor - the oppressive ruling power of the day, Jesus turns this threat presented amidst flattery into an opportunity to share an object lesson and dare the people listening – and us – to live in a still more excellent way.

Oh, that crafty Jesus. By saying that people should give the emperor what is due to the emperor he has slipped through the trap set by the question. Yet Jesus knows he walks to death and the cross – he is not trying here to save his skin by slipping through this trap. No, no, our crafty and humble, powerful and compassionate teacher Jesus in his answer side-steps the trap so as to point us towards a moral high ground. The language choice used here by the writer of Matthew ensure this.

The Greek word used for lawful - “is it lawful to pay taxes to the emperor” - the Greek word for lawful here, “Egsestin” has both political and theological meanings. The use of this Greek word therefore points out to the reader and listener that “what is legal is not necessarily moral.” “what is legal is not necessarily moral.” To be even more clear, what Rome or any other ruling political power then or now considers lawful may not be morally acceptable in the eyes of Jesus and God (Working Preacher, Professor Raj Nadella, October 2020).

The Roman empire was by all accounts an oppressive ruling power, exemplified by taxes being taken – not to be used for the good of all people as taxes should be – but to fill the coffers and pockets of corrupt rulers. The corrupt wealthy were getting wealthier while the poor were only getting poorer. This is still happening today, isn’t it? Sadly, all over the world, including in our own United States, there are still far too many people in power - political or otherwise - who are wielding that power only for their own selfish gain. Taxes that line their pockets. Health care systems that give Rolls Royce access to those with money and prestige, while leaving the poor with little or no access. Political positions used for personal gain instead of fighting for the collective and common good of all.

This is why the theological meaning of this word “lawful” in today’s text matters so much. For corruption and greed and the oppression of people may be defined as lawful by worldly powers, but in the eyes of God it is anathema – is abhorrent and unacceptable. With over two hundred references in the scriptures to caring for the poor and the widow and the needy; with the greatest commandment given by our Savior to love our neighbors as ourselves, there is no doubt that in God’s eyes our moral calling, our lawful rendering to God what is God’s includes care of neighbor, rising up for the oppressed and the marginalized. Even rising up against corrupt worldly powers when they are working in opposition to our moral calling to tend for the least among us.

Giving to the emperor what is due the emperor may mean literally overthrowing an emperor.

Giving God what is due to God, with all of the moral imperatives contained therein, may give rise to all sorts of amazing works of light in this world.

In the twentieth century in Central and South America, giving God what belonged to God led leaders of the Roman Catholic Church to stand in solidarity with the poor in a movement and beliefs that came to be known as Liberation Theology. You may have heard me tell the story of the Lutheran Christian Leymah Gbowee and her fellow peace activists in Liberia, who helped end the Civil War and were awarded the Nobel Peace in acknowledgement of their efforts. Giving God what belonged to God.

Giving God what belongs to God led people of God in the Civil Rights movement begin in the 1960s to their focus and gave them their staying power. Nelson Mandela, locked away in prison, focused on his faith and was tempered like steel for the time when he would be called to lead the people of South Africa in their newfound freedom. Right now, in Belarus, there are thousands upon thousands of people rising up against the corrupt dictator in power. We may not know yet, if and how faith plays a role in these efforts in Belarus, but we know that when people rise up against tyranny God is in their midst, crying out for justice right alongside them.

For faith provides a locus, a centering and sustaining taproot around which an enduring power can be built for the sake of rendering, giving to God what is God’s though building a better world for all people. As we heard from our Isaiah text today, with God’s help mountains can be leveled, doors of bronze and iron bars can be cut through!

According to the Oxford dictionary the word “rendered” means to “separate out the impurities.” And isn’t that just what our crafty, bold, genius Jesus does in the gospel story today? Separate out the impurities to point with clarity towards the moral, righteous calling of God who is our ultimate authority, and to whom all glory and honor and humble service deserves to be given.

Indeed, this is a still and more excellent way towards which we, with Christ’s help, can strive. Amen.